We had sufficient time. But,
We just didn’t love each other enough for the time.
I want to live the way a one-eyed fish lives.
When it’s alone,
the aloneness becomes noticeable.
The one-eyed fish, Bi-Mok.
I want to love like them
for the sake of my life. 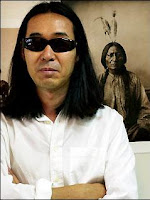 Ryu Shiva was born in 1958 in a small town in South Korea, and his real name is Ahn Jae Chan. He is one of the most famous and affective contemporary poets/essay writers in Korea now. And his first book of poetry, “I miss you, although you’re being with me,” published in 1991, is still easily found on the best seller shelf at a book store all the time.
What people mostly find impressive and interesting about Ryu’s poem is that he infuses his poems with the warm humanity using his smart way of looking at normal life and trivial events that everybody has but they don’t value that much. As we read his works, we can easily find how differently he has expressed his feeling toward small things in the life in his poems, such as Salt, Nail on the stars, Salt-star, Eyelash etc. Readers are strongly impressed by the insignificant things that haven’t had such a big meaning in their life, but are expressed in a beautiful way in Ryu’s poems. When you read his poems for the first time, you might get the feeling that he’s just singing the lame lines of love songs. But what makes Ryu’s poems different from others’ is his poems are made up by him after his own deep self-examination and based on his sense of values that he learned from his many trip to India, and Tibet over 15 years.
His works on composing poems are also found distinctive by many critics because his poems are mostly meditative and religious. The calm aftertaste of his poems gives readers one more chance to ponder deeply after reading it.
“One-eyed fish’s Love”, his second poem book, was published in 1996 after his long his trip to Thai, Sri Lanka, India, Nepal and Himalaya in 1994. And besides those two poem books mentioned, the meditation seeking book, “Things that life has thought me”, and an aphorism poem book, ”Had I known what I know right now at that time,” are also famous for his work. 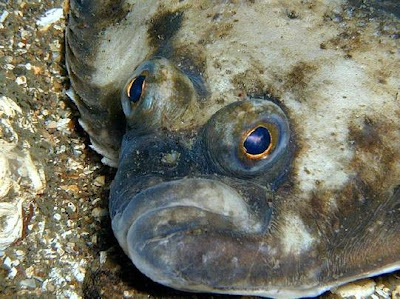 Lots of people might be wondering if the “real” one-eyed fish actually exists after having read this poem. There are two different theories about this controversial “one-eyed fish.” Some people believe Ryu Shiva, the poet of One-eyed fish's love, made a mistake when he wrote this poem because of the lack of an accurate knowledge of what exactly the one-eyed fish is. On the other hand, some believe that the fish he’s talking about in the poem is not a real fish, but it indicates the fish, living at the east ocean and called “Bi-Mok(比目漁),” that appears in the Chinese myth story. Moreover, this Bi-Mok fish is described having only one eye, so at least two of them are needed to swim toward correct way in the Chinese myth story.
But, ironically enough, those two theories are talking about the same kind of fish, basically. They both are talking about flatfish/flounder/plaice. The flounders have a thin, flat body with both of their eyes on the top of their body. But, very long time ago, in China, where all the culture was focused on the inland life, people didn’t have a chance to observe the sea creatures thoroughly. So, old Chinese ancient people believed that the flat fish had only one eye even though it has both of them on the top of its body. Due to that fact, the rumor that says the flat fish has only one eye was spread out all over the country and the myth was created from that.

A one-eyed fish, Bi-Mok,
that had been attached to each other for its whole life
to live like a two-eyed fish.
I want to love like them.

-> The poet is trying to say that the love which needs each other to complete the real “one (1)” is the true love we should be seeking after in this part of poem.

We had sufficient time. But,
We just didn’t love enough each other for the time.
-> It’s the most beautiful part of this poem. And it leaves with me lots of questions about my attitude toward my loved ones in my life. This part of poem explains why we can’t love like a one-eyed fish. In my own interpretation, the poet seems to be trying to point out that lots of people out there create ridiculous fake excuses not to be sincerely committed to somebody. It’s “selfishness” in us, which only keeps ourselves away from our loved ones. People are afraid of getting hurt if they show their love as much as they actually do. So we are playing with our emotions in order to protect ourselves, observing how they react to us. As a result, we can’t be sincerely committed or attached to somebody like a one-eyed fish in the poem.
Posted by Ruby at 4:46 PM

can i repost this to my blog?
i think this is really beautiful poet and i really liked it!

Do you know where i can find the book online/buy it online ?